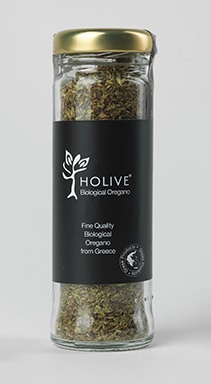 Oregano is a culinary herb, used for the flavor of its leaves, which can be more flavorful when dried than fresh. It has an aromatic, warm, and slightly bitter taste, which can vary in intensity. Good-quality oregano may be strong enough almost to numb the tongue, but cultivars adapted to colder climates may have a lesser flavor. Factors such as climate, season, and soil composition may affect the aromatic oils present, and this effect may be greater than the differences between the various species of plants. Among the chemical compounds contributing to the flavour are carvacrol, thymol, limonene, pinene, ocimene, and caryophyllene.

Oregano's most prominent modern use is as the staple herb of Italian cuisine. Its popularity in the U.S. began when soldiers returning from World War II brought back with them a taste for the "pizza herb", which had probably been eaten in southern Italy for centuries. There, it is most frequently used with roasted, fried, or grilled vegetables, meat, and fish. Oregano combines well with spicy foods popular in southern Italy. It is less commonly used in the north of the country, as marjoram generally is preferred.

The herb is widely used in cuisines of the Mediterranean Basin, the Philippines, and Latin America, especially in Argentine cuisine.

In Turkish cuisine, oregano is mostly used for flavoring meat, especially for mutton and lamb. In barbecue and kebab restaurants,[clarification needed] it can be usually found as a condiment, together with paprika, salt, and pepper.

During the summer, generous amounts of dried oregano are often added as the aromatic and flavorful topping to a tomato and cucumber salad in Portugal, but it can be used to season meat and fish dishes as well.

The dried and ground leaves are most often used in Greece to add flavor to Greek salad, and is usually added to the lemon-olive oil sauce that accompanies fish or meat grills and casseroles.